This site is primarily focused on the 1227, which, while it was perhaps the most iconic Anglepoise, was by no means the first.

Most information on the web will tell you that the first was in fact the Anglepoise 1208. This is a little misleading because while it is the first lamp produced by Herbert Terry and Sons, and thus the first to carry the Anglepoise name George Carwardine actually briefly produced a version of the lamp under his own company name: ‘Cardine Lamps’ first.

I have been unable to find an official name for this lamp so lets just call it the Equipoise (as this is what George Cawadine waned to name the Anglepoise originally): This early version was produced in the early 1930’s at George Carwardine’s own premises in Bath,prior to his collaboration with Herbert Terry and sons of Redditch.

The First Anglepoise or The Equipoise Lamp: 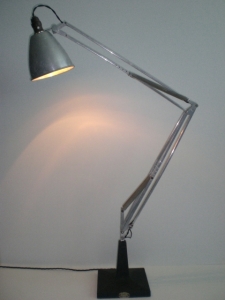 While it looks similar it is not a 1208 and 1209 as these models refer to the Terry and sons catalogue system and therefore to later lamps. There are in fact quite a few subtle differences from the later Terry 1208-09 models :

Initially the 1208 and 1209 were virtually identical, the main difference being that the 1208 arms were chromed, while the 1209’s arms were painted*. Later (most likely in the early 1950’s) the models were slightly revised and a short arm version of the1209 became available, it had a 12 inch arm, as opposed to the 18inch arm of the standard 1208 and 1209 (both of which retained the same overall dimensions of Cardine’s original lamp).

The lamps proved to be immensely popular. The high demand led Terry and sons to the idea of producing a version for the domestic market. However they felt that the existing 4 spring designs, while successful were somewhat too industrial for the home. George, collaborating with the designers at Terry and sons, went back to the drawing board. What they came up with was a 3 spring Anglepoise, which, (due to Herbert Terry and sons sequential numbering system for new designs), was designated as the 1227 model. The 1227 was a smaller, simpler and more elegant design than its older brothers. Manufacture commenced in 1935, and sales of the new lamp soon overtook those of the 1208 and 1209. That said the larger 1208 and 1209 had a gained a solid reputation as industrial and architectural lamps and both remained in production for several years.

Like the 1227 the design of the 1208/9 received several subtle changes throughout it’s production. These can be helpful in dating lamps, I;m no expert on these models but hres a brief rundown of things to loo out for ( all of this information was gleaned from the wonderful site at Vintage Anglepoise Lamps)

For more detailed information  about and photos of the Carwardine lamp, the 1208 and 1209 please check out the wonderful  site that is Vintage Anglepoise Lamps

Images on this page are and from:

* This is based on information kindly given by Macstiltskin, gained from a 1935 sales catalogue from Terry’s